Zheng He (1371-1433/1435) was initially known as Ma He and was born in Kunyang, Yunnan. As a Muslim, he was a well-known mariner, explorer, diplomat, and fleet admiral during China's early Ming dynasty. He was given surname "Zheng" due to contribution to Zhengzhou. Zheng He was also known as "Sanbao" during the time of service in the household of the Prince of Yan as a Eunuch. This name was a reference to the Three Jewels (triratna) in Buddhism. His famous deeds being seven expeditions to the "Western" or Indian Ocean. (Reference: Wikipedia) 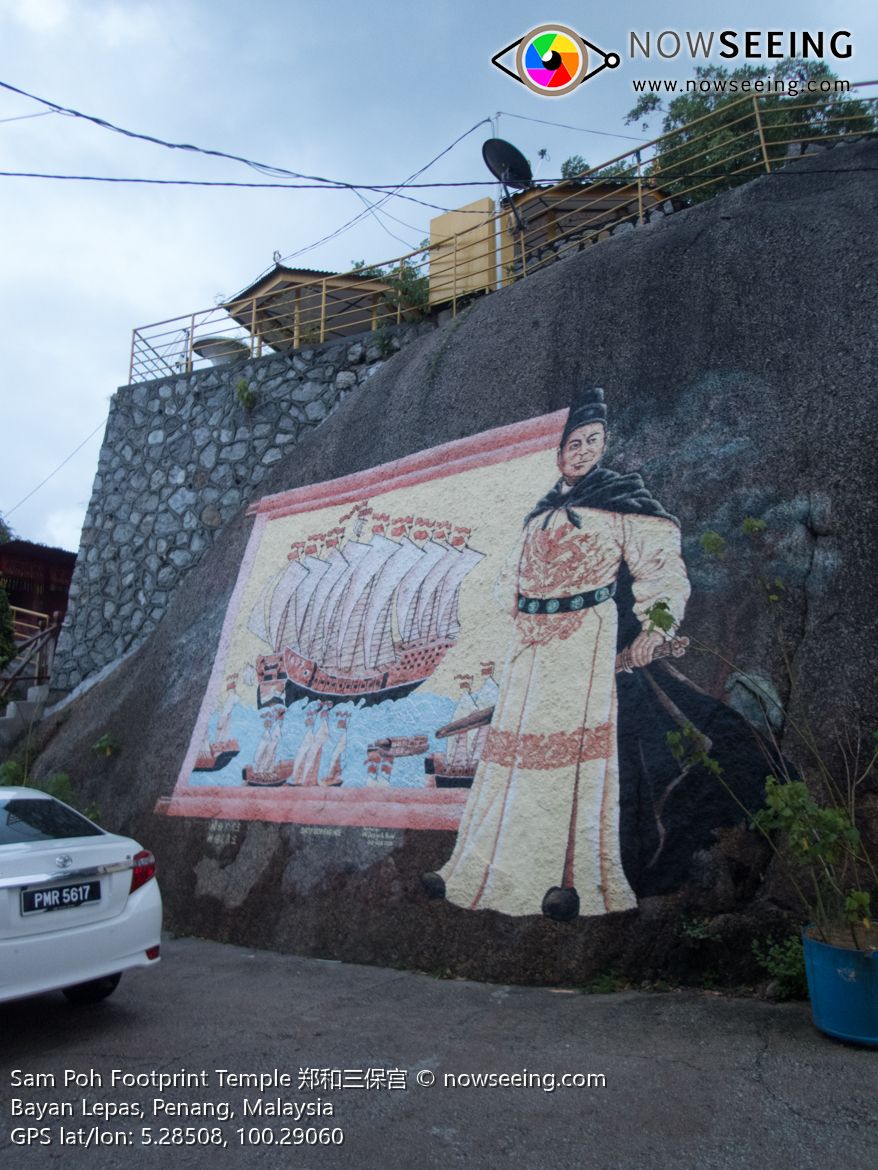 Malacca was discovered by Zheng He during his first voyage in year 1405-1407 and found out that there were a sizable Chinese community there that time. Zheng He also solved pirate issue along Straits of Malacca. To commemorate Zheng He, currently there are four Sam Poh Temples in Malaysia - Penang, Terengganu, Sarawak and Melaka. 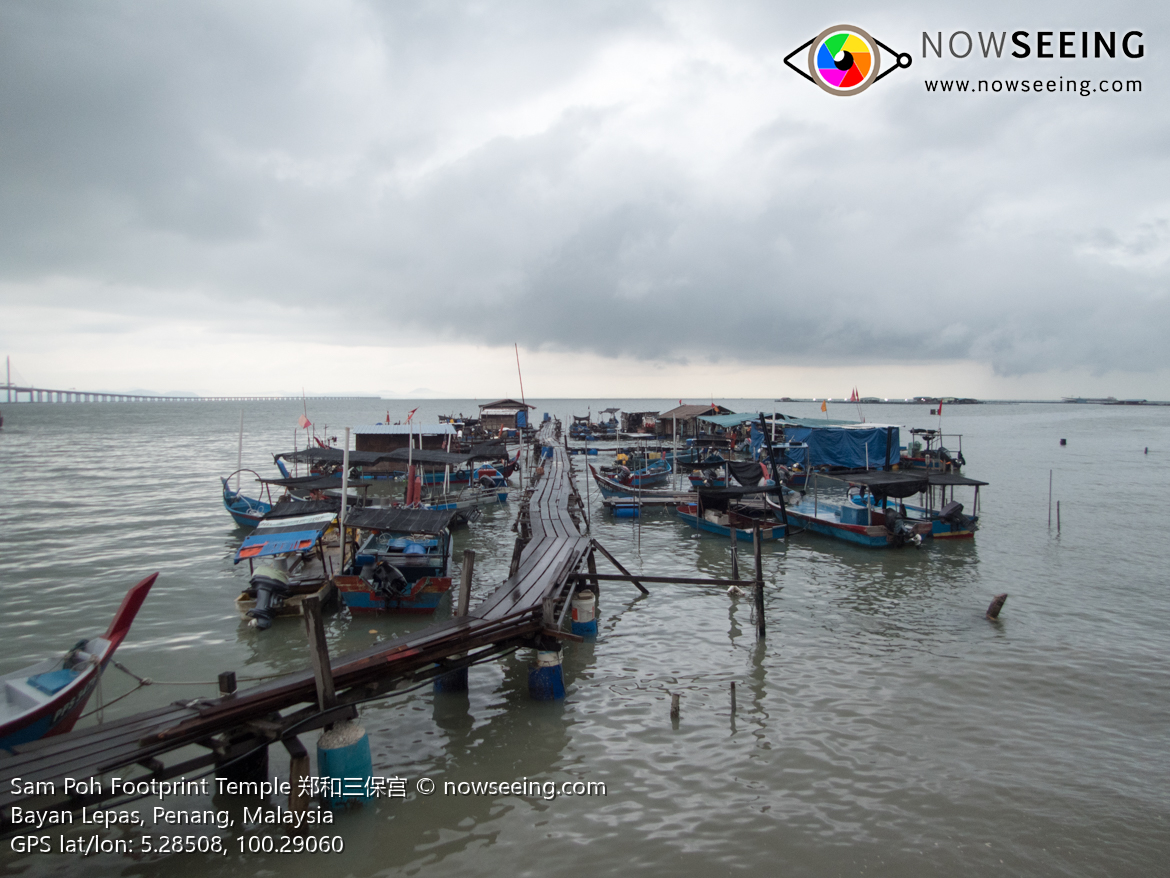 Located at Batu Maung in a fisherman village (next to Southbay), Sam Poh Footprint Temple was built in year 1795 and was rebuilt in year 1995 with current look. The temple has a scenic fisherman wharf and second bridge view. 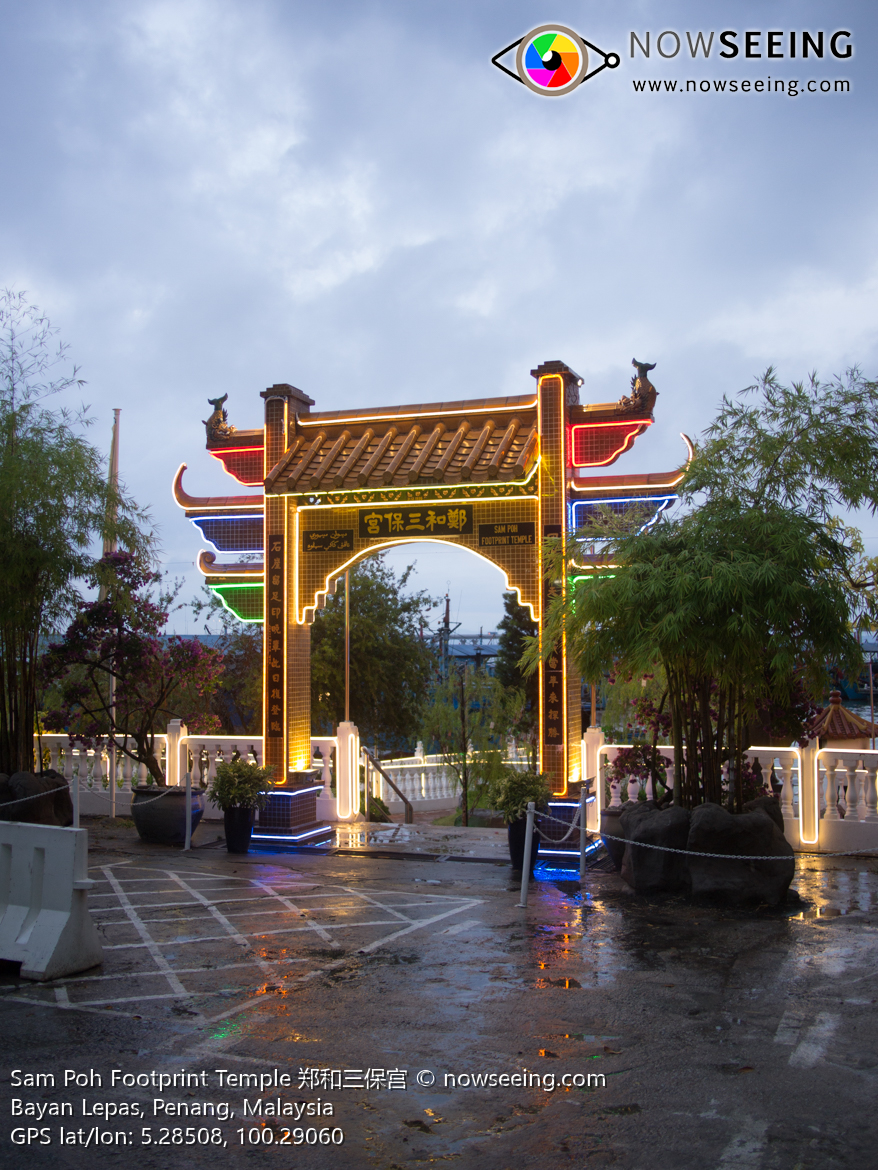 It was one after-rain evening when we headed to Batu Maung to have a look on Southbay's progress. We took a left turn in front of the Southbay Plaza and reached an alley at the end. Inside the alley was Sam Poh Footprint Temple with Torii (Gate) powered by LEDs. Without further a do, we parked our car on the slope and decided to pay it a visit.

It was ashamed that this was our first time visiting Sam Poh Footprint Temple after living in Penang island for so many years. Walking pass the gate was a small garden with a 2.5 meters tall Zheng He (Sam Poh) statue. 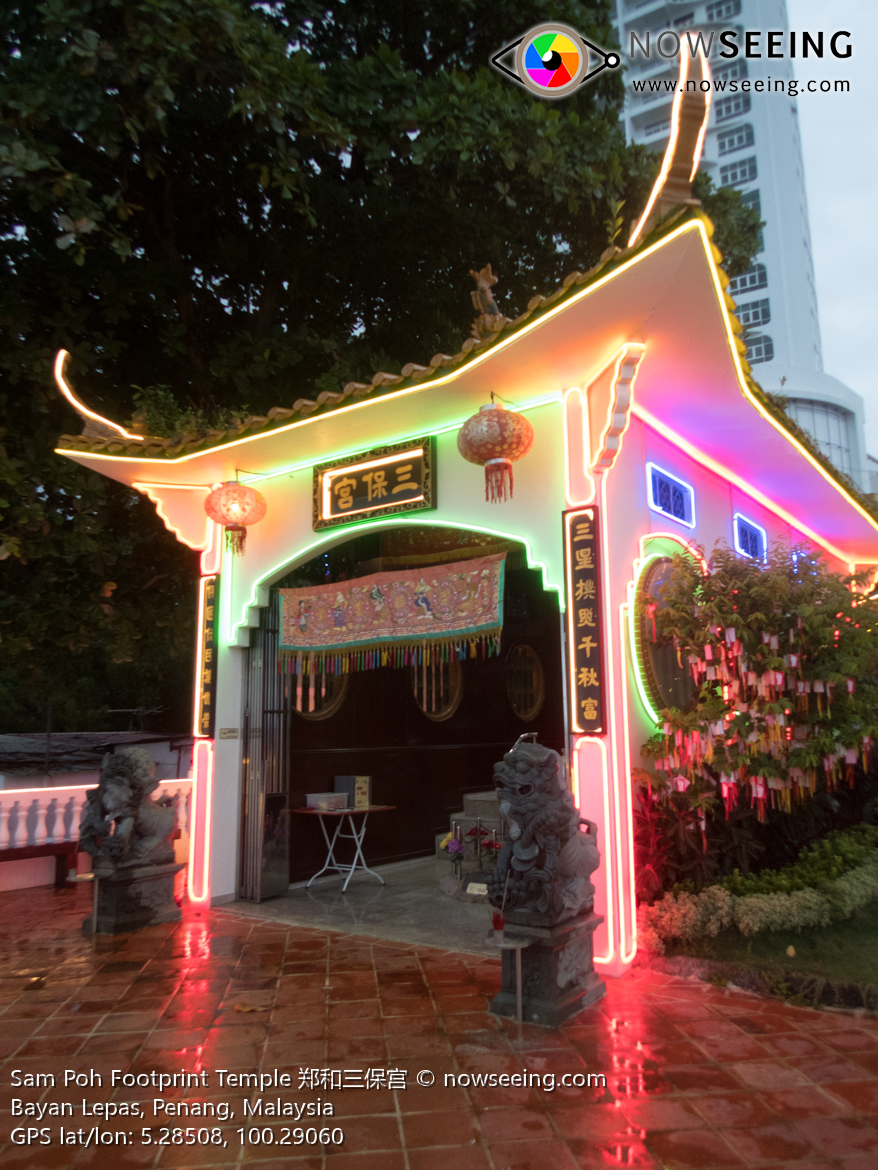 We were the only visitors that evening and we particularly enjoy the peaceful and quiet surrounding. 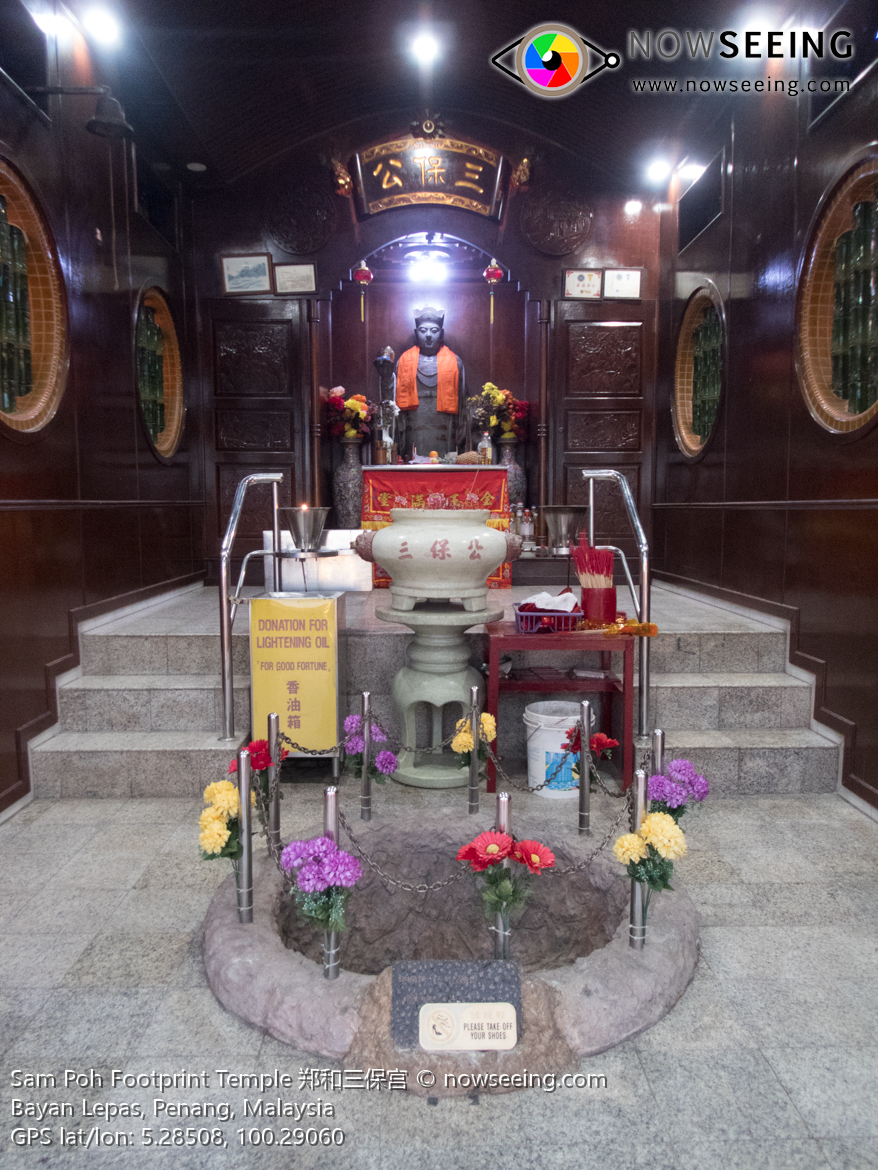 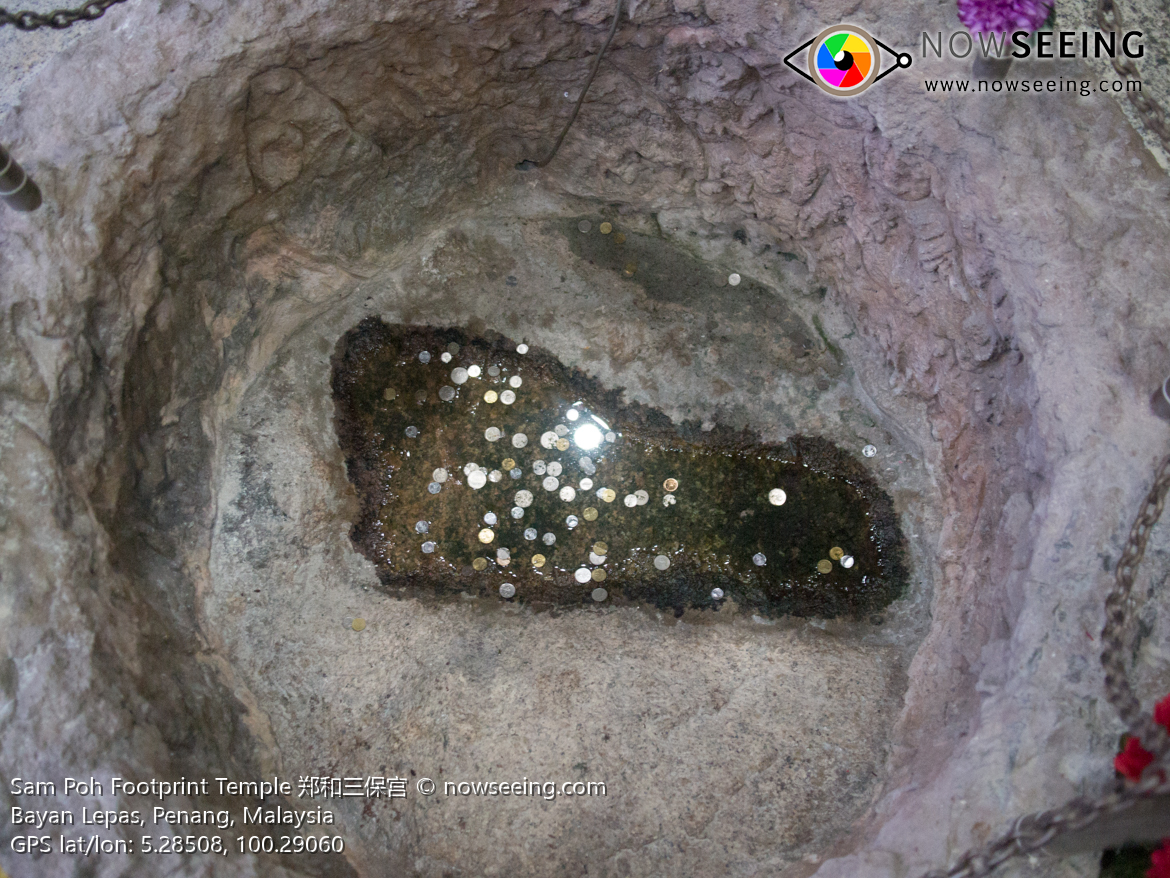 Inside the temple is Zheng He's footprint which is 1.2m in length and 0.5m in width. Honestly, it is one of the largest human footprints we have ever seen. Rumor said you may make a wish in front of it and your wish may come true. 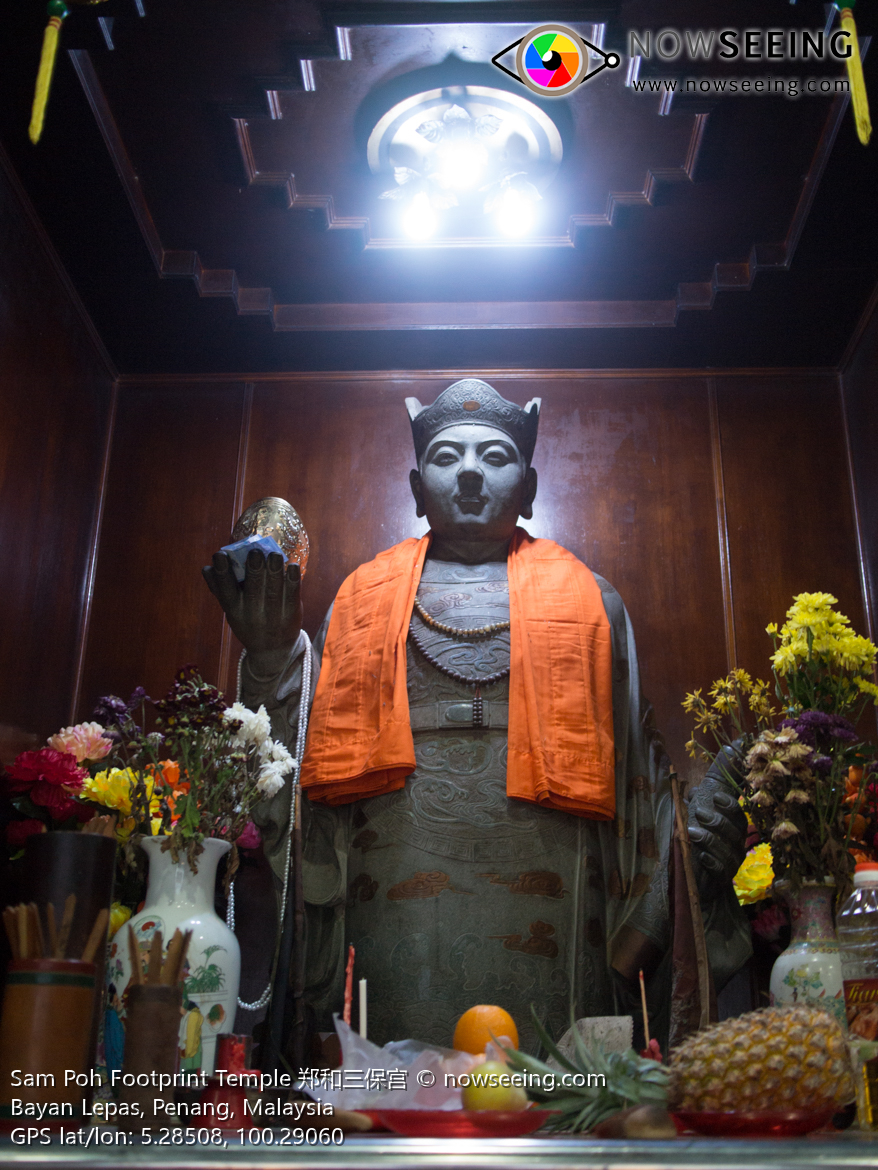 Behind the giant footprint is another Zheng He's statue with visitors offer prayer to the legendary explorer. You can also offer prayer with ten joss sticks. 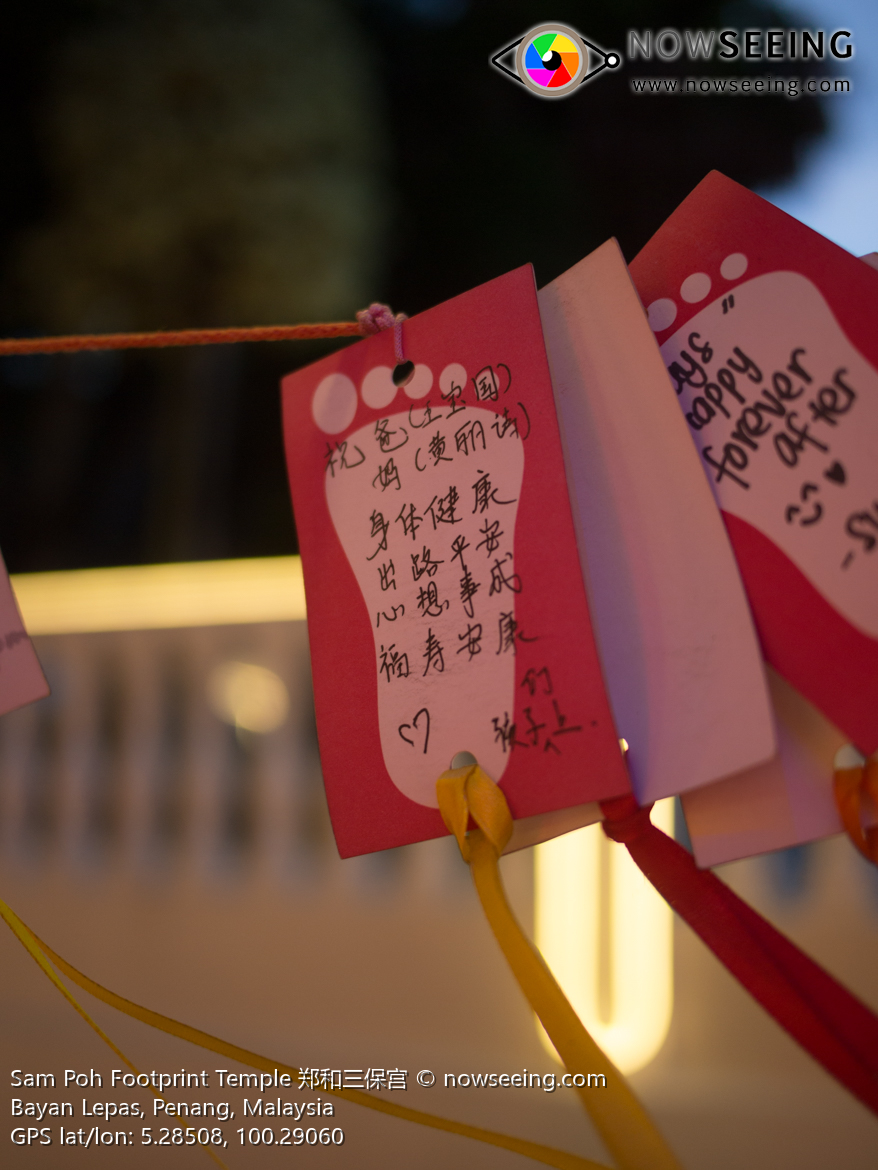 Cards are also available inside the temple, allowing visitors to write their wishes onto it and hang it on "Wishing Tree". 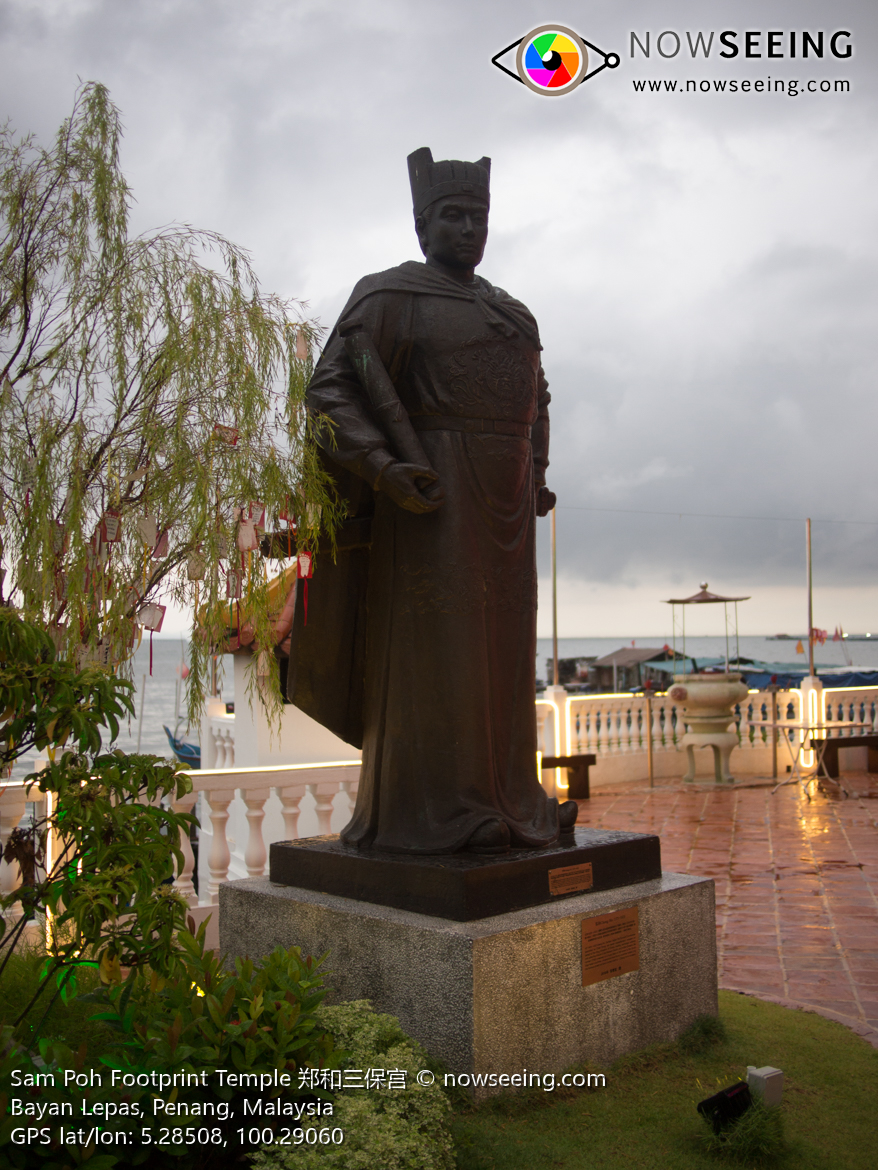 As a whole, Sam Poh Footprint Temple is a clean and peaceful fisherman village's temple easily to be missed even by Penangites. The temple is opened daily from 8am to 6pm but our guess is that the temple never closes (we visited it around 7pm that evening). However, the surrounding can be too quiet to walk alone so be sure to visit it before the sky getting dark.